Class 8 trucks are responsible for about a quarter of the greenhouse gas emissions generated by the U.S. transportation sector. That amounts to over 400 million metric tons of carbon dioxide (CO2 ) emitted each year.

Diesel engines contribute to pollution by creating particulate matter, a mix of fine particles and liquid droplets that can become lodged in the lungs and irritate eyes and skin.

U.S. fleet owners and trucking companies face increasing pressure from both national and state agencies to reduce their trucking emissions footprint and keep up with changing environmental standards. Earlier this year, the Biden administration proposed stronger emissions regulations for heavy-duty vehicles, with the U.S. Environmental Protection Agency (EPA) proposing that the industry cut up to 90% of NOx emissions per truck by 2031.

Transitioning to electronic vehicles (EVs) could help combat pollution and comply with government regulations, but that’s simply not financially possible for many fleets.

In this post, we’ll review some of the main semi-truck emissions regulations and how they’ve evolved. We’ll also look at a solution fleet owners can implement to meet these standards without transitioning the entire fleet to EV.

U.S. emission standards for heavy-duty compression ignition (CI) engines have evolved over the past 50 years. The EPA develops these regulations, with California’s Air Resources Board (CARB) setting additional standards for that state.

Here’s a brief timeline of how emissions standards have played out for heavy-duty vehicles since 1970:

1970: Congress passes The Clean Air Act, which mandates a 90% reduction in automobile emissions by 1975. That same year, President Nixon established the EPA, the agency responsible for regulating motor vehicle pollution. Per the EPA’s website:

1971: The EPA officially starts testing the fuel economy of all vehicles as a precursor to informing consumers about vehicle gas mileage.

2000: The EPA launches a national program to regulate heavy-duty vehicles and their fuel as a “single system.”

2005: The EPA finalizes durability procedures that help manufacturers predict emission levels for certain types of new trucks and vehicles at the end of their useful lifespan.

Dieselnet breaks down EPA and California emission standards for heavy-duty CI engines from 1974 through 2027, as follows: 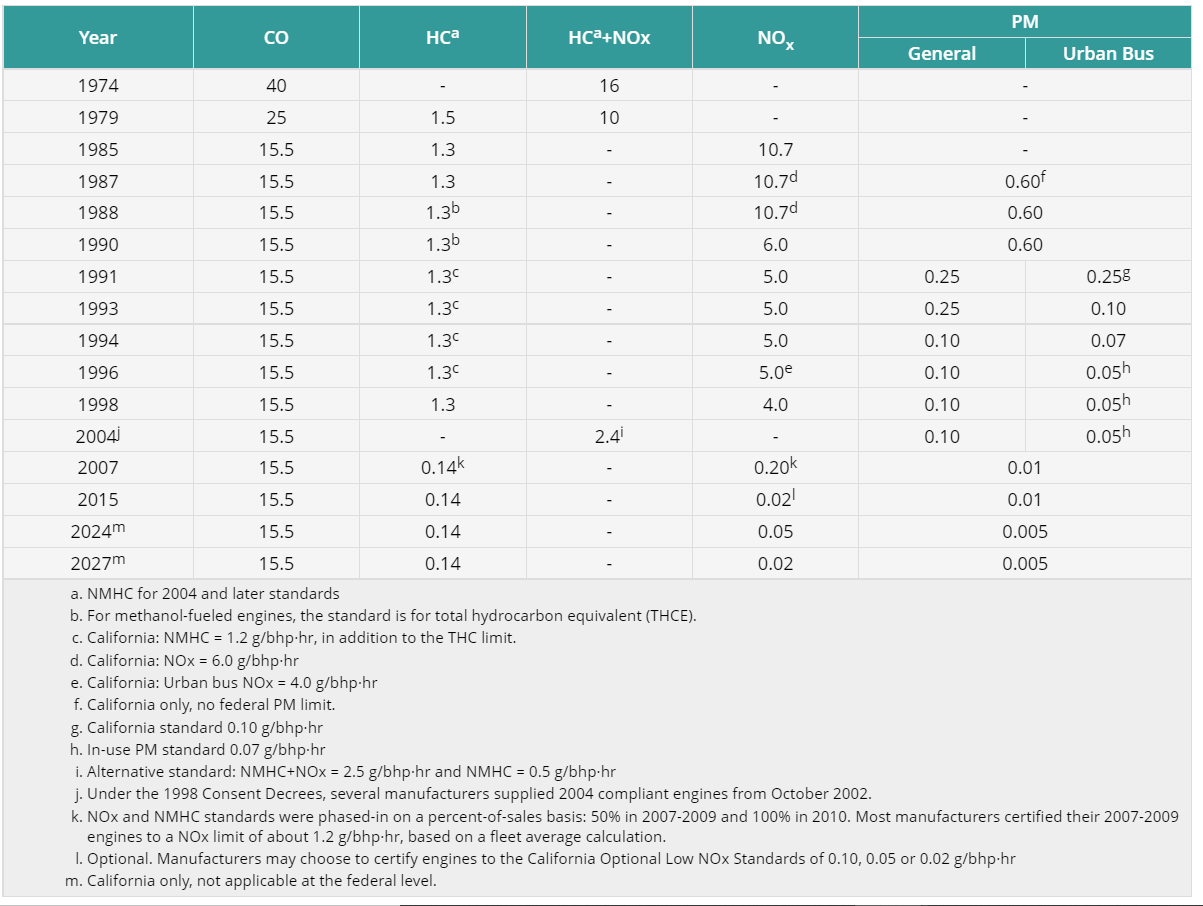 As anyone in the trucking industry knows, heavy-duty trucking will likely rely on internal combustion for at least the next decade. To further curb emissions and make existing trucks cleaner, the EPA has proposed tougher emission rules for existing heavy-duty vehicles and engines.

These rules, which would come into effect starting in 2027, aim to cut NOx emissions up to 60% by 2045. Another proposed EPA rule impacts greenhouse gas (GHG) emissions standards for heavy-duty vehicles starting in 2027.

The rules are part of the EPA’s Clean Trucks Act (CTA). Introduced in 2021, the rules set new standards for criteria pollutants in the trucking sector and update GHG emissions standards for heavy-duty vehicles starting with model year 2030.

These proposals mean that owners of big-rig trucks must become more aware of how their fleet contributes to pollution and what steps they can take to reduce emissions.

Fleet owners, truck industry groups, and owner-operators are understandably concerned about the potential costs of new and upcoming regulations. The implementation of stricter emission standards could cost manufacturers between $19 and $31 billion by 2045, though the EPA estimates net benefits of over $200 billion.

In March 2022, American Trucking Associations President and CEO Chris Spear voiced the industry’s support for reducing air pollution by curbing GHG and NOx emissions as long as the regulations wouldn’t hurt “the reliability  of the trucks and trailers purchased or impose unreasonable or unworkable costs on the industry.”

In response to concerns about high costs to fleet owners and owner-operators, the Biden Administration had already begun rolling out government subsidies via The Supporting Trucking Efficiency and Emission Reductions (STEER) Act.

What is The STEER Act?

The STEER Act, formally introduced by U.S. Rep. Rodney Davis in July 2021, is a voucher program that helps cover the cost of retrofitting heavy-duty trucks with technology that reduces emissions.

The STEER Act Coalition was formed in 2022 to further the bill’s passage. Currently, the coalition, of which TruckLabs is a member, is reaching out to legislators. Our aim is to get the STEER Act passed as a standalone bill or as part of President Biden’s Inflation Reduction Act — a bill that, among other measures, allocates funds to help reduce carbon emissions by 40% by 2030.

If passed, The STEER Act’s total budget would be $500 million, spread over five years.

Under The STEER Act, the per-unit voucher size decreases incrementally based on the size of the fleet, as follows:

In its overview of the STEER Act, the EPA’s Office of Transportation and Air Quality writes:

“This legislation aims to accelerate market penetration of active emission-reducing technologies like TruckWings for Class 8 trucks by creating a program to significantly reduce the up-front cost of purchasing and installing these technologies.”

Class 8 truck emissions regulations are quickly becoming the new normal, and fleet owners must comply with them.

To help fleets meet those standards, TruckLabs offers TruckWings, a retrofit aerodynamic device for Class 8 trucks. At speeds above 52 mph, the device closes the gap between the cab and trailer automatically, reducing drag, increasing fuel efficiency, and improving stability.

Learn more about how fleets are saving money and reducing emissions with TruckWings. Sustainable Trucking Trends and Tech to Watch in 2023